Gymnastics Horizontal Bars VS Uneven Bars [What Are Their Differences]

When it comes to the Olympics, you will discover that most games between men and women are similar. But, this is not the usually followed in gymnastics. The events and Gymnastic equipment's that they use are very different. In fact, they only share two games; vault and floor. One significant difference of Gymnastics Horizontal bars vs Uneven bars is that the former are used in men sports while uneven bars are used in women competitions.

History of The Bars

The uneven bars first consisted of two parallel bars on varying heights. Transition from one bar to another was very easy at the time. The bars were introduced in 1936 as the games become more difficult.

Dimensions of The Bars

The Uneven bars are usually two bars that are parallel to each other. They are set on different heights with a high bar of around 8 feet and the low bar at 5 and half feet. This, however, can be changed for junior athletes and made lower, but for the elite gymnastics, this is usually the standard measurements. They also are set at a width of 6 feet.

Uneven bars are synonymous with "Uneven parallel bars" or "asymmetric bars" and the terms are used interchangeably.

Parallel bars where invented in the 19th century by a German called Friedrich Jahn. They are especially helpful in promoting upper body strength. The bars are made of wood of 2 inches thickness, 6.5 feet high, 11.5 feet long and they are often 16.5 inches apart. Depending on the sport the height and width can be adjusted.

Men tend to have six events at the Olympics while women do four. Women will use the uneven bars and balance beam while men are relegated to the still rings, pommel horse, horizontal bars and the parallel bars. However, both genders share the floor exercises and the vault.

The routines in the uneven bar include swings, jumping and spinning. You will notice that parallel bars are made to incorporate the male physique. Men tend to have upper body strength while women have lower body strength. This has also influenced the type of games played. 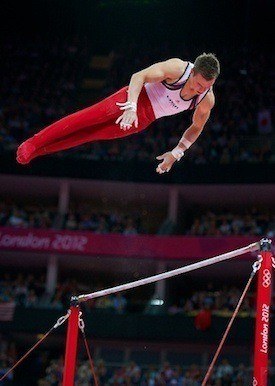 Women use games tend to have a lot of music and artistry; men do not. You will find the women sports with a lot of dancing moves when using the uneven bars.

The uneven bars are mainly made of fiberglass and sometimes wood. There is a springboard that joins the two bars. The width varies depending on a particular event and the age of the gymnast. You will find that in junior championships the uneven bar heights and width vary from the elite ones.

The parallel bars are used by men only in gymnastic events and include games such as swings and flight sports. They have been a part of the Olympics games since 1896.

Almost all the rhythmic gymnastics are performed with music while only the women floor exercise uses music in the artistic gymnastics.

The pommel horse is usually considered the hardest male event because the balance beam is 4 inches wide and is the major cause of falls.

Both men and women teams composition is very different when it comes to the Olympic teams. Men begin their junior program by first starting with the Basic Skills Achievement Program; that has three levels for boys. They advance to Age Group Competition and those who become elite are added to the National Olympic team.

For women things are a bit different because they start with the Development/Beginning four levels. The Compulsory Levels 5 and 6 come next followed by other levels till you reach level 10. From here you can be added to the elite team.

When it comes to scoring dance moves like leaps and jumps form a major part in women gymnastics but not in men's. Men however require more strength when they are doing tumbling exercises. For men games, one of the main focus is physical strength. You need to have practiced your moves well and done a lot of physical exercises to succeed in the parallel bars.

For women, they mainly focus on artistic moves that include dances, and they tend to have music in their performances.

Both men and women will use the vault table, but it is set at a higher height for men. For men, the tasks performed are more difficult and include; double-flipping faults like the Tsukahara double-back or handspring double front. You will find very few women performing such.

Before 2001 both men and women used to perform on the vaulting horse with men doing lengthwise while women did the widthwise. This was changed to the vault table as the former was considered more dangerous. 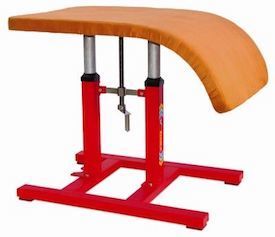 In the mean time, if you are looking for a perfect gymnastic mat, check out our review here!