Apollo Dirt Bike 125cc Reviews, DB-X18 [An Underdog You Should Give A Chance To?] 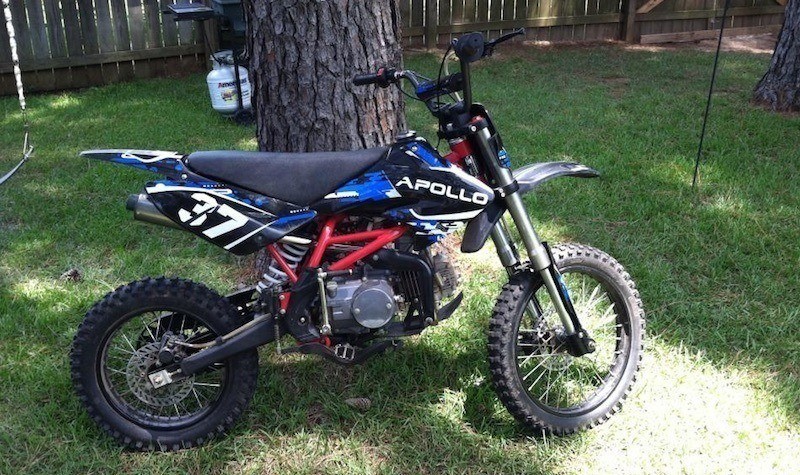 This Apollo Dirt Bike 125cc reviews would normally start like any other, I would summarise my main point, giving you the specs of this dirt bike, provide both pros and cons. But with this dirt bike, namely DB-X18, there's a small catch.

You see, if you're into dirt bikes and off-road driving in general, you'll probably know what I'm talking about. First it got a host of bad reviews. People were calling it "awful", "stupid", "a wreck" and other names all around. Then other bike enthusiasts came to the dirt bike's defence, claiming the negative bike reviews it got were wrong.

Now don't get me wrong, the dirt bike reviewer scene is small, at least when compared to, let's say, a fandom of any anime you can name. So this conflict was a very minor event at best. But it got enough traction for at least a different kind of review.

So How Will This Review Work?

For this text, I will be approaching the topic of this bike by talking about its negatives first. Now when I say "negatives", I mean both the negative sides brought up by the people who didn't like the bike AND the actual problems you might face with this product. Then I will focus on its positives, including the points that the defenders of 125cc made. Only at the end will I focus on the price and other minor details.

Reasons Why People Went After This Dirt Bike 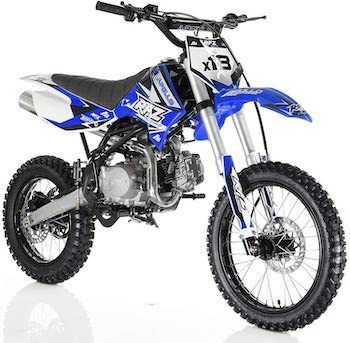 As I stated in the previous paragraph, a fairly noticeable number of people in the bike-loving community tore into this dirt bike. They complained that the bolts are coming loose. They went on about spokes breaking on the back tire. The bolt that attaches the pipe to the exhaust comes out, they also said. It has a bad exhaust, they added. The clutch cable, the clutch itself, the rear wheel, the tire, the bolts etc, these folks had problems with everything.

But most of all, there was a trend slowly growing. A trend where all of these "negatives" were the result of one thing. You're thinking the result of the poor craftsmanship? No. In fact, most reviewers that covered this dirt bike in a negative way blamed its country of origin, China. They attributed its cheap construction and weak frame (among other problems) to the Apollo simply being a Chinese company, therefore "bad" without question.

The good folks defending this Dirt Bike (and at times, the entire Apollo brand itself) raised perfectly good points. And keep in mind, the opinions I'm about to put before you come from veteran off-road bikers and/or bike mechanics. So, people with proper experience when it comes to dirt bikes.

The point they put across is that most people complaining are merely avoiding to do regular maintenance. As is the case with any bike on the market, you should do frequent check-ups and go over any particular problems. That means tightening bolts, changing the oil, oiling up the chain, and cleaning it.

And again, most of the problems the defenders of this Dirt Bike address are easy to solve, even if you're not a mechanic. Tightening a few bolts and washing away the mud from the wheels or the frame takes some time but is not particularly difficult. You might do an occasional repainting job or replace a bolt or screw, but again that's nothing compared to maintenance of more expensive bikes out there.

Legitimate Negatives of This Dirt Bike

While the detractors of this Dirt Bike DID react brashly and went after easily solvable problems, there are issues with this bike that you should be aware of before the purchase. Retailers normally tell the customers to change the carburetors upon purchase.

Another common issue that is brought up is how loose the exhaust is with new models. And then there is the assembly, you get to assemble the handlebar, the front wheel, and the rear shock. If you're into motorbike maintenance, this will not pose a problem.

Probably the biggest issue with this model is the difficulty of getting spare parts. There are retailers out there that sell its bike parts, but they are few and far between. Ordering directly from China is also somewhat of an issue (as is with another Chinese bike manufacturer, Coolster). The parts either come late, don't come at all, or arrive on time but bent or broken.

However, with some research, you can find local retailers selling the parts you need. Not to mention that the entire bike is economical when it comes to replacement, most major parts around the motor or the wheels can work, even if not directly made by Apollo.

Don't let the negatives fool you, though. this Dirt Bike is an amazing ride to own. It is somewhat more powerful than the 110cc version and slightly less than the 250cc one. So right then and there you have the perfect gift for your teenage son. Wait, you have a daughter? No worries, the bike is small and light enough for both genders. 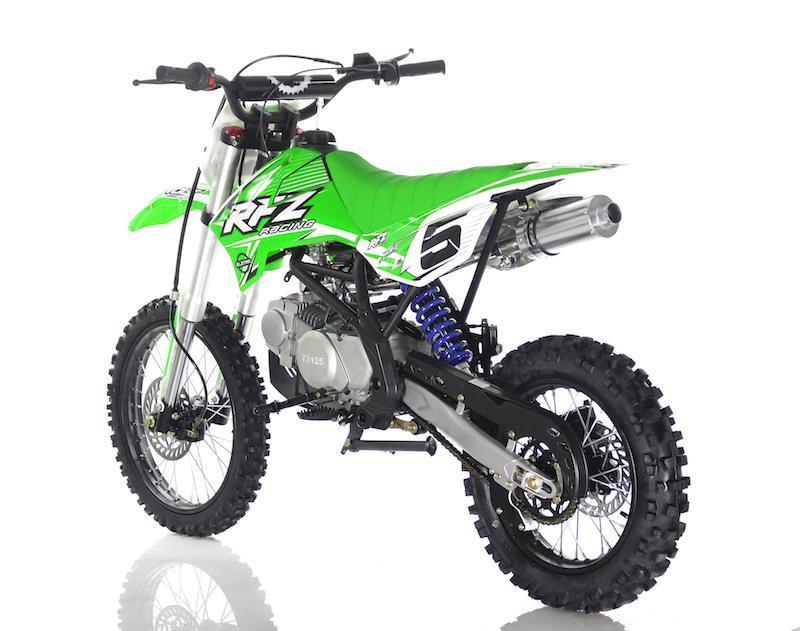 However, it is also durable when on the road, or rather, off it. Its frame makes it suitable for full-grown adults of sturdier build. So if you feel that this might be too dangerous for your son or daughter, give it a go yourself. Or, you should simply consider these choices, perfect for young kids age 7 and above.

Considering how economical the bike is, not only will you be able to repair it quickly, but upgrade it as well. Users that have had this bike for a while demonstrate that themselves in their video reviews.

Finally, there is the price. Most of Apollo brand bikes sell for under $1.000 at major retailers. In this regard, 125cc is no exception. You can get it for as low as $630, though the price usually fluctuates around $700-ish.

The Apollo 125cc Dirt Bike has, as its name tells us, a displacement of 125cc. This is, naturally, its piston displacement as well. Its height to seat is 32.28", and it can carry 5 ft 8" ladies and 6 ft gentlemen, both up to 220lbs of weight. The engine type is a 4-stroke single cylinder one. Expect a maximum speed of around 55mph, on a 10kW or 8.2 horsepower motor. Naturally, it is a kick-starter and has a manual clutch, with four gears. 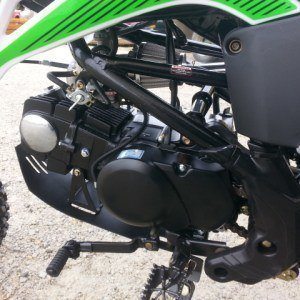 Overall, a light, sturdy, petite dirt bike for any and all interested in off-road adventures.

This light dirt bike comes with regular, everyday disc brakes. Both front and rear brakes are hydraulic and work rather well, a staple for all Apollo products. The suspension is non-adjustable for both front and rear, standing at 760mm and 320mm respectively. You control the brakes with both your hands and feet.

The gas tank of this Dirt Bike has the capacity of 1 gallon, or 3.5l. It's pretty hefty, but possibly the easiest part you can find and replace on the Western market. The bike itself has manual transmission, which is no surprise, and its diminutive size allows for more speed than its 110cc predecessor. Oh, and it is air-cooled.

The bike comes in a variety of different colors. However, the four that you can most commonly buy on the domestic market are red, green, blue, and black. A quick aside, most reviewers go for either green or black, possibly because those are the models you will run into the most with your retailers.

An interesting detail to note is that Apollo opted for inverted front forks for this model. This is mainly to improve upon its overall safety a degree more. You can easily replace these, as most retailers sell them, both online and off.

In the mean time, check out these dirt bike helmet reviews, all riders regardless of age should always wear their helmet for safety purposes.

The drama has settled, the people have spoken, and the verdict is out, this Dirt Bike passes. While it isn't perfect, it's just what you need for that teenager of yours who likes offroading a bit.

It has a motor of decent power, can reach good speeds, and despite being light and small, it's durable and repair-friendly. And if you take good care of it, this bike will make every dollar you spent on it worth it.

I hope after reading our Apollo Dirt Bike 125cc Reviews, you will be able to get more insights on this chinese dirt bike brand. A true underdog if ever there was one, The Apollo 125cc Dirt Bike ultimately wins. 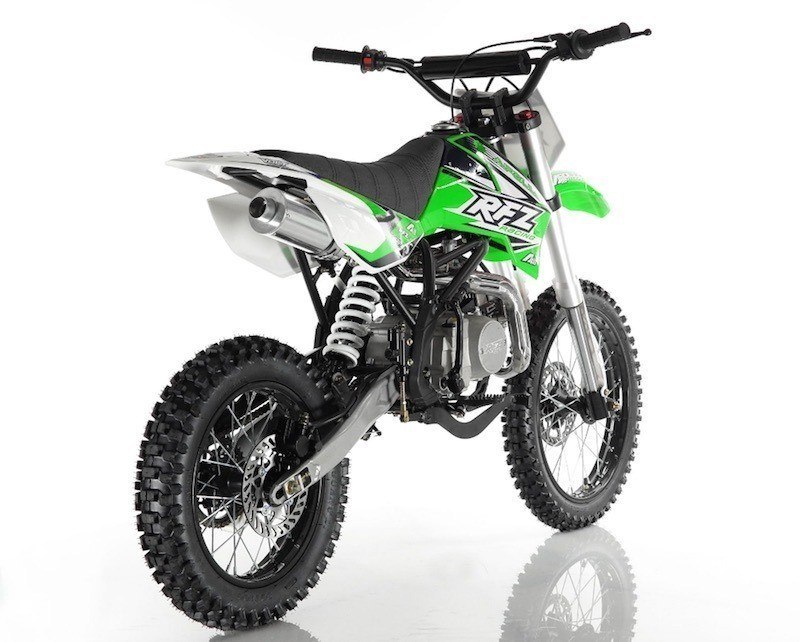